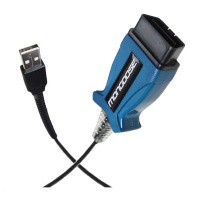 Features and Benefits:
1. Data Lists
2. Active Tests
3. Monitor
4. Utility tests
5. Reprogramming
6. Diagnostics Trouble Codes
7.DICE - Diagnostic Communication Equipment, is a tool that is used together with VIDA all-in-one to communicate with the vehicle.Communication makes diagnosing and troubleshooting the vehicle possible, as well as downloading software.
8.DICE has an integrated CARB cable, which is connected to the vehicle's diagnostic socket. When connecting to the vehicle, DICE is powered as long as the battery is charged.
9.DICE has a folding hook that is designed for hanging the unit from one of the grab handles in the vehicle for example.
10.DICE is equipped with four status LEDs that indicate the status of the software, the USB and Bluetooth communication and the interface to the car.
11. At one end of the unit, there is a DC input where a battery cable or adaptor(12V) can be connected. The adaptor is used when upgrading and troubleshooting the DICE.
12. In the other end of the unit, there is a removable cover that could be removed by turning the screw on the cover.
13.High performance with ARM cpu inside.
14.High reliability of products using SMD chip, and certified by CE and FCC.


Back to top
Back